Millions of holidaymakers head for Benidorm each year, with its beautiful sandy beaches and vibrant nightlife being major attractions.

Benidorm is a beach city which never sleeps and manages to cater for many, diverse tastes. Benidorm’s entertainment rolls on from dawn to dusk with talented tribute bands, karaoke kings and queens, cabaret, drag shows and gay bars creating a raucous – and sometimes – raunchy vibe.

Whether you fancy a wild pub crawl, a casual night out or a glamorous evening, Benidorm will come up trumps.

You may find a favourite spot to return to time after time but we would highly recommend you venture out into Benidorm to try several of its world-class entertainment venues.

Benidorm has been dubbed the Spanish Manhattan because of the high number of skyscrapers in the resort. However, it could also be called Spain’s answer to New York as it is certainly a city which never sleeps.

Even at breakfast-time you can hear music pumping from some of the bars or a crooner blasting out their favourite hits on the karaoke machine.

But Benidorm’s entertainment scene really shines at night when the lights are on which makes the skyline showing the silhouettes of the skyscrapers particularly impressive.

Some of the best tribute bands can be seen performing in the bars along the Levante beach promenade and in the English Quarter.

Elvis, Michael Jackson, Meatloaf, Adele, Abba, Queen and the Blues Brothers come to life on an almost daily basis in Benidorm. Some of the tribute acts are truly polished performers but all have one desire – to get Benidorm on its feet to get the party started! 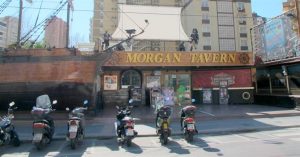 In and around the English quarter, the Ambassador Hotel, Morgan’s Tavern and Sinatra’s are great places to enjoy live music.

If you prefer a beach view, Heartbreak Rock Bar and Daytona on Avenida Madrid in front of Levante beach have tribute bands and other live music.

Another popular live music venue along Avenida Madrid is Tiki Beach, which is one of the liveliest beach bars in Benidorm. It’s perfect for cocktails or a few cool beers after a day on the beach. As well as music you may also find Yanni the street magician performing some really great tricks at your table.

The Rock and Roll House in the Rincon de loix district (near Benidorm Palace) is a great venue for fans of the 50s.

However, there are hundreds of bars offering live music in Benidorm, so you could just go for a wander to stop at the one that takes your fancy.
A slice of home in Benidorm’s English Quarter

It’s largely made up of British holidaymakers making themselves at home in the British bars. The only difference is in the price. Here you will find bars offering John Smith’s bitter at knockdown prices, a euro a pint, happy hours, all-day English breakfasts and a cracking Sunday roast with all the trimmings.

It may seem familiar to you as this part of Benidorm stars in the TV comedy Benidorm. The Sol Pelicanos Ocas hotel is the all-inclusive Solana while Morgan’s Tavern features as Neptune in the series.

With so many bars, discoes and restaurants in the Quarter, this is the perfect place for a good old British pub crawl.

Popular spots are Morgan’s Tavern and Rockefellers for live entertainment while the younger crowd tend to head for the Hippodrome Disco Pub for great music and dancing.
Enjoy a taste of Spain in Benidorm’s Old Town

For a flavour of Spain in Benidorm, the old town is the place to go. It has a lovely mix of shops, bars, discos and restaurants among its narrow, cobbled streets.

For entertainment, the old town is well-known for its drag shows and gay bars. It’s another great area for wandering around from bar to bar or sitting on an outside terrace and people watching.

One of the best acts to see is international female impersonator Jordan Rivers performing at the Rich Bitch Showbar in the old town. It’s great value for money, incredibly funny and the costumes are divine! 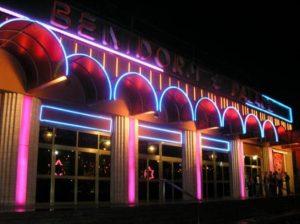 If cabaret takes your fancy, a night out at the Benidorm Palace needs to be planned into your trip.

In the past, the popular Benidorm Palace has been voted the best cabaret theatre nightclub in Europe – and the venue continues to put in the razzle dazzle with its great shows, singers and dancers.

You can enjoy the complete dinner-show package or just the theatre show. The Palace also regularly puts on concerts by great singers from the world of music.

Nearby is the well-known Levi’s Showboat with hilarious acts including drag acts, singers, comedy and dancing. It can be bit risqué and isn’t for the faint-hearted but it is a scream.
For something a bit different in Benidorm

A glitzy night out can be enjoyed at the Casino Mediterraneo Benidorm which opened in 2014.

It’s a massive gambling venue with many slot machines to try your luck or you can settle down at one of the tables to play Black Jack, American roulette or poker.

Sports fans will love the casino as it has many television screens to follow the major events as well as sports betting booths where you can have a flutter.

The casino hosts tournaments on the first floor where there is also an art exhibition showcasing local artists. 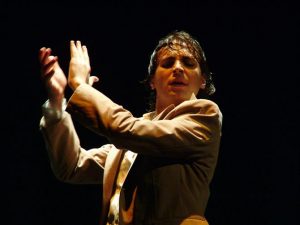 A visit to Spain would not seem complete without witnessing the passion and emotion of flamenco.

Although many miles from Andalusia, which is the birthplace of flamenco music and dancing, shows are often shown in bars in Benidorm.

You are most likely to find a flamenco show in one of the tapas bars in Benidorm old town. Alternatively, Cerveceria El Andaluz in Calle Esperanto regularly holds flamenco shows. Book a table, order some tapas and get ready for a rollercoaster ride of emotions during your evening.