As the Alicante region is one of the healthiest places to live it seems only fitting that it should have become a magnet for holidaymakers wanting to play sports, go cycling, hiking or running.

The Alicante region’s beautiful beaches and mountains are perfect outdoor running tracks. You can choose from a jog alongside the beaches, which offer flat routes for speed or gentle jogging or a harder challenge up the mountain trails. Either way, you will be rewarded with views of fabulous natural scenes.
Jog alongside Benidorm’s magnificent beaches

We can start with a gentle beach run along the famous Benidorm beaches with its magnificent skyscrapers forming a backdrop to your left with the shimmering Mediterranean sea and Benidorm Island to your right.

The run begins on the Poniente beach at the southern end by Calle la Cala. A good time is at sunrise or just before sunset as the area is less crowded and the weather will be cooler, especially in the summer months.

If you really want to exercise the legs, you can run on the soft sand part of the way which can be hard work.

Jog along the promenade alongside the beach up to the Parque de Elche park, a lovely shady area that is well-loved by doves and pigeons.

Keep the sea to your right and head towards Benidorm yacht club and on your left you will find the steep steps taking you up to the famous Balcon with its beautiful square, iconic church and amazing views sweeping along the coast.

It’s a great place to stop to catch your breath and take in the views as you can really appreciate why Benidorm is known as the Spanish Manhattan as you count the number of skyscrapers lining the coast. You also get glorious views of Benidorm’s famous sandy beaches and you may see windsurfers or paragliders enjoying the views from another angle.

This jog is about 3.5kms so you could turn back or continue along Poniente beach to take you to the English quarter, well-known for its British bars and entertainment. It’s another 2.5kms from the Balcon to the far end of Levante beach but it is an easy, flat route along the promenade lined with bars and cafes.

Run alongside nature at her best in Jalon

This is another gentle run but this time you are surrounded by mountains and natural beauty as the route takes you alongside vineyards and almond orchards in the Jalon valley.

The run starts along the Avenida del Juan Carlos 1 road, opposite the Bodega Xalo, where you can pick up some great wines and olive oil at bargain prices.

You can take this route to return to the Bodega Xalo but this time running on the other side of the river. For a longer route, head down the Cami del Moli de Lliber which is a good pathway surrounded by farmland leading to the pretty little village of Lliber.

The Jalon Valley is famous for its wine-making and is a very popular spot for cyclists and hikers as there are some fabulous routes.

More adventurous runners may fancy trying more testing routes from Jalon up the Sierra Bernia, a winding road taking you high up into the mountain.

Separating the beach towns of Javea and Denia is the impressive Montgo mountain, a haven for wildlife, birds and rare flowers. It is a popular route for cyclists and hikers with several routes of various difficulties available.

It’s a challenge for runners with some challenging uphill scrambles but, rest assured, you will be rewarded with amazing views of the coastline. On a clear day, you can see as far as the party island of Ibiza. 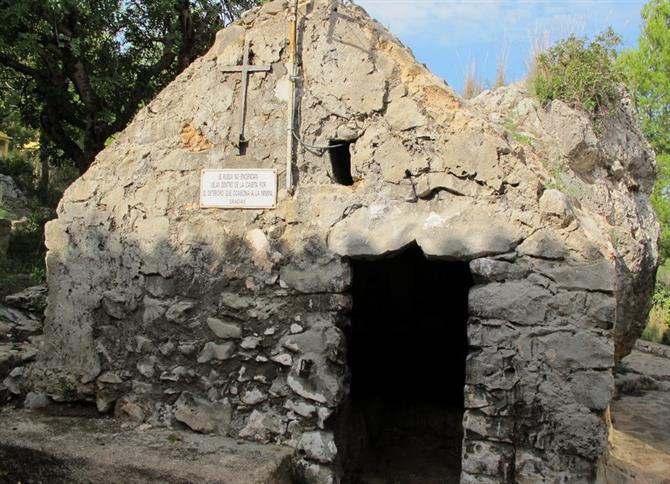 There are three routes starting from the charming Ermita del Pare Pere chapel on the Denia side of the Montgo. You can see the little cave where the friar Pare Pere prayed and meditated in the 17th century and the chapel built in his honour in the 1980s.

One is a three-hour circular tour of just over 4kms in total which will take around three hours. It’s of medium difficulty as there are some climbs as you head up to L’Aigua cove and the Raco del Bou cove.

Cars are not allowed so you can enjoy a peaceful run in a beautiful, natural setting. You may notice an aroma of lavender or herbs wafting across your path as these plants live in abundance along the track.

Heading up the track from the Pare Pere chapel, you’ll come to a fork in the track and you’ll need to take the east path to your left. Running uphill, the landscape becomes even more impressive with fabulous views across the bay up to Valencia and over the mountains.

Keeping to the eastern path, you’ll come across some steep steps heading up to the cave, which used to be a water reservoir.

There is an inscription in the rock dating to 238AD which is protected by a metal fence.

Going back down to the chapel, you’ll come across the Raco del Bou or Bull’s Corner, so called because of the mountain’s shape here. 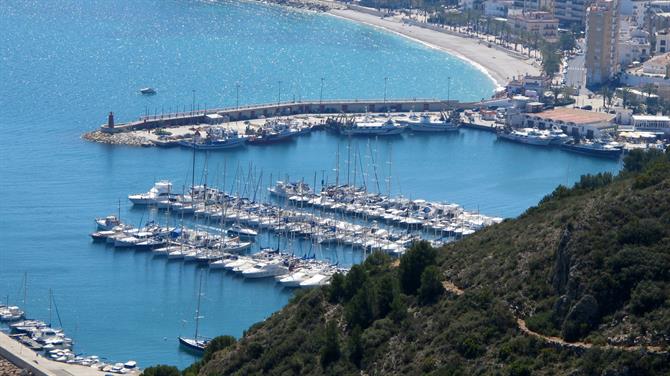 A tough run taking in some or all of Javea’s 15 miradors or viewpoints is a brilliant way to really appreciate the town’s wonderful landscape and views.

It is about 30 kilometres in length with some steep hills to climb from Els Molins mills in the north along the coast to the stunning Granadella beach in the south.

Every year, the Mirador Challenge is held with 100s of hardy runners and walkers attempting to complete the trail.

Our favourite route is about 6.5kms and starts at the Els Molins viewpoint on the edge of the Montgo and heads off to the Cabo de San Antonio cape with beautiful views across to Denia and Javea as well as over to the lighthouse and the Mediterranean.

We head back along the road as if going back to Els Molins but at the main road, turn left to run down into Javea Port, home to the fishing fleet and stunning sailing boats.

A stunning inland nature park, Font Roja is a beautiful landscape with more than 1,000 species of aromatic herbs, green countryside, mountains and the crystal-clear Vinalopo river.

Our 12km run takes us from the recreation area with parking on the CV797 road. Head 50 metres from the car park to a walkway.

Keep going straight to jog up to the top of Menejador, which stands 1,365 metres high. The climb is worthwhile as you can see across to the valley of Alcoy and the Sierra de Mariola and Maigmo mountains.

You’ll be running through one of the finest Mediterranean forests in Spain as well as past the Coloma ice house.

Remember to wear suitable clothing, especially footwear and carry enough suncream, water and a hat. Don’t walk in the hottest part of the day, especially in summer, as people have taken ill with exhaustion and had to be rescued.