The beautiful blue-and-white tiled church dome peeking out among the glistening white houses in Altea’s old town has become an icon of the Costa Blanca.

Sitting between the busy resort of Benidorm to the south and Calpe with its majestic Ifach rock to the north, Altea is a beautiful little resort to explore the 200 kilometres of the Costa Blanca coastline and its mountains.

Although Altea is just 10 kilometres from Benidorm it is a world apart in terms of its beauty, culture and visitors. It’s much quieter for a start and appeals to people seeking a tranquil holiday amid beautiful scenery. There are two main areas – along the beach and up in the old town. 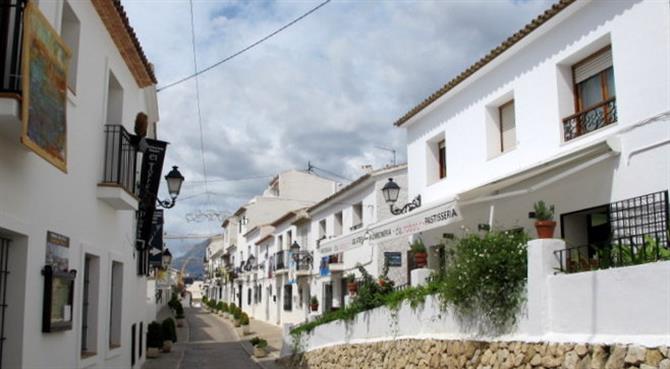 Altea old town looks typically Spanish with its pretty, narrow cobbled streets with white houses leading up to a beautiful central square. The whitewashed houses provide a clean canvas for the flowerbeds bursting with Mediterranean colours.

It’s no surprise that Altea attracts artists and photographers who are drawn in by the town’s charm, fantastic light and natural beauty.

There is so much to inspire someone with a creative eye from the cobbled streets, magnificent sea and mountain views, historic buildings or simply a cat lazing in a flowerbed in the sunshine. 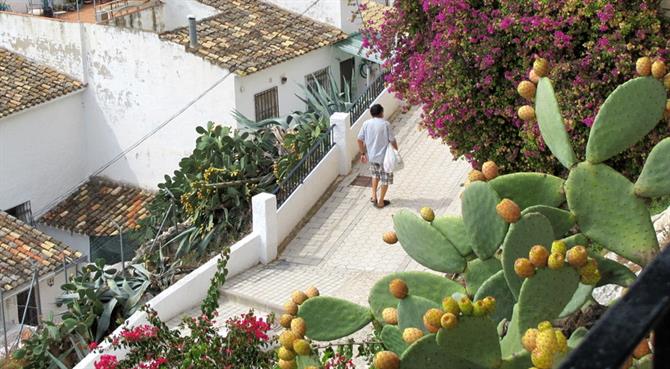 It’s a steep climb up to the old town so we’d advise you to take your time to catch your breath and enjoy the views over the beach and the sea.
Charming narrow, cobbled streets of Altea

It’s a charming place to wander through the little streets finding fabulous, family-run shops and restaurants while stumbling across some historic buildings which have made their mark in life in Altea.

In the 16th century the upper part of the old town was built to protect it from attacks. A castle was built on what is now the Plaza de la Iglesia with the upper town being surrounded by a wall with three gates. Today, just two of these gates remain – Vell Portal and Portal Nou.

Your tour could start at the Plaza del Convent just off the N332 main road running along the length of the Costa Blanca. Here you will find the Iglesia de San Francisco, an old Franciscan convent.

If you walk up from the Plaza del Convent, to the corner of the streets Calle Pont de Moncau and Calle La Sequia, you will find examples of two grand houses built for 19th century landowners – Casa Beneyto (casa de cultura) and the Pharmacy, which was the old chemist shop Farmacia Martinez.

Opposite are the pretty Escaleras del “Mestre de la Música”. This is where the climb really begins but it’s so beautiful to wander along the lovely cobbled street lined with whitewashed houses and shops with steps taking you up to the main square.

These steps are dedicated to the composer and musician Francisco Perez Devesa who directed many musical bands in Altea, Alfaz del Pi and Calpe. There are 255 wooden steps in the characteristic dark colours of Altea old town.

Before climbing the steps, go a little further up the road to the Barrio de Bellaguarda district to see where the defensive walls were built in the 14th century to protect the coast from marauding pirates. A few more steps and you get to the Plaza de la Cruz which is another pictuesque little square.

Off this plaza, turn up the Calle Costeros del Matxos road for the Portal Vell gateway, providing further evidence of the old walled city.
Dream scenes for artists in Altea

This is another dream for artists with the patterned cobbles and archways making a frame for the pretty buildings and squares.

Now we go through these charming streets to the beautiful Plaza de la Iglesia with its church, the Virgen del Consuelo, taking pride of place. This is a lovely, traditional Mediterranean square and it’s well worth grabbing a coffee in one of the bars so you can relax and take in the atmosphere.

It’s a superb church at the highest point of Altea with its famous blue-and-white tiled dome. The church was built in the 19th century in the style of a Latin cross with a stunning interior of classic gold and floral motifs. Look out for the ceramic shapes and dragons sculpted within the church.

Although the church itself was built in the19th century with work being completed in 1910, there has been a place of worship here for more than 900 years. It also bears the battle scars of the Spanish Civil War in the 1930s when one of the bell towers was destroyed by Franco’s men. 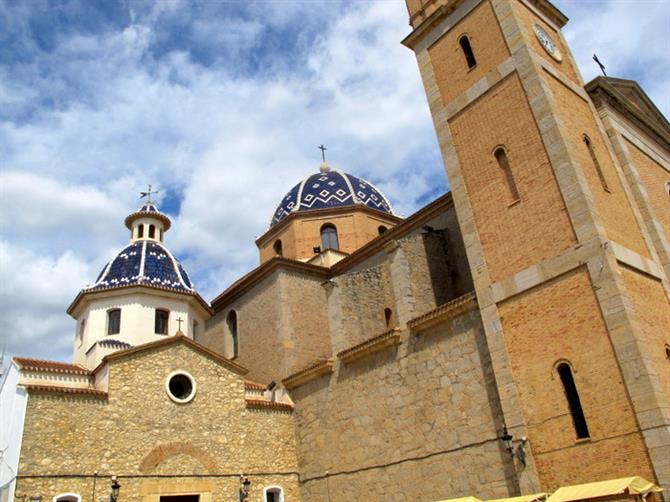 The Virgen del Consuelo church dominates over one of the most picturesque squares on the Costa Blanca. It’s lined with bars, restaurants and shops so you can easily spend an afternoon here while enjoying the fabulous views over the Mediterranean and towards the hulking skyscrapers in Benidorm.

Look towards the sea from the square and you can see further evidence of the ancient walls which used to protect Altea.
Head for the hilltop church of Altea

It’s certainly worth popping in to the church to see the beautiful stained glass windows, the expansive use of gold, and the sculptures.

In and around the square, you will find little shops selling crafts, jewellery and paintings so you can pick up a unique souvenir of your time in Altea. There’s a lovely little art gallery in Calle Sant Josep and you can also check out cultural events in Altea at the Palau Altea with live music, theatre and exhibitions.

The beach resort’s place as a haven for artists has been given a further boost with a Fine Arts department of the Miguel Hernandez University in Elche setting up in the town, so bringing even more talented artists to Altea. 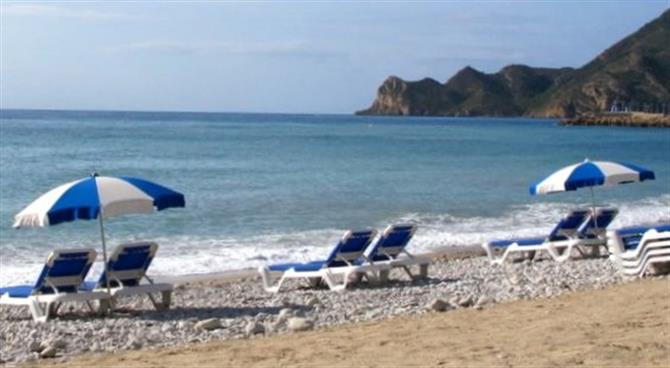 Beach at Altea
Don’t forget the beaches in Altea

While in Altea, also visit the lovely beaches and seafront promenade brimming with cafes, bars and restaurants for refreshments.

You can get to Altea via the N332 coast road linking the Costa Blanca resorts which cuts through the middle of the town. The Denia to Benidorm train also stops at Altea station or you can get the tourist bus from Benidorm.